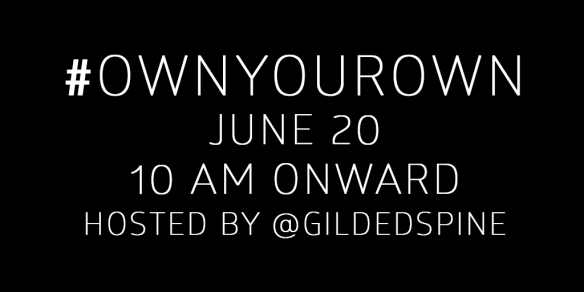 Read more about #OwnYourOwn here, or read through the hashtag on twitter

It’s hard to be alive sometimes. It’s not easy to be a person. That’s true, I think, across the board. It becomes more horrifically true when you layer on oppression.

It becomes more true when you spend your formative years consuming narrative after narrative telling you that you are most definitely going to have to die at the end of the story. Maybe because your very nature is duplicitous. Maybe so that some cis person can learn about injustice and rail against it. Who the fuck knows.

When I was growing up, all I knew about myself is that I didn’t seem like the other kids. I felt sporadically uncomfortable in my skin, like I wanted to step out of my body and into a new one I’d edited and reformed for myself. Other days were just fine. The dominant trans narrative–I knew I was like this since I was four years old, I have always been a boy trapped in a girl’s body*–that was so different than this nebulous shifting experience of my own physical/emotional give and take that it took decades for me to begin to think of myself that way.

There weren’t stories for me.

There weren’t reflections of people like me in the books I read, in the shows I watched.

And I was poorer for it.

In my own writing, I stick nonbinary and genderqueer people in all the time. I put them in there to show other people that we exist, and that we have entire lives. Families. Hobbies. Minutia. That we survive and thrive.

I put people like me in so that there is a reflection of me out there in the world, just in case there is some kid like me yearning for a mirror that they don’t even know they need yet.

Whatever story is burning in you to get told? Tell it. Whatever story you’ve always wanted to read but have never found? That is the one only you can write because you are the one who has lived it. No one can write it better than you.

Show the world what it’s like to live anyway. Shatter all those stories where you’re supposed to be the sidekick, or the joke, or the sad dead thing in the corner someone better off can pity. Or the villain. You’re none of those things. You’re the hero. Show that part. Show how alive you are now, and how alive you’ll stay, and how much glorious breadth there is in your life every day.

I believe in you.

*My kid, though, fits this narrative precisely.