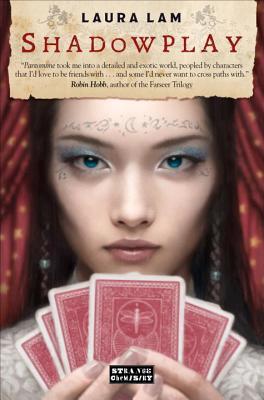 The middle book of any trilogy has the hardest job to do: it has to complicate the overall narrative while still being its own book. Bad middle books feel like filler; hundreds of pages of marked time between two cliffhangers. Good middle books walk the fine line between staying true to the story you fell in love with in the first book and twisting it enough to keep you interested in reading the next installment.

Shadowplay, I am happy to say, is a good middle book. As the second book in Laura Lam’s Micah Grey series, Shadowplay opens after one crisis and ends with another, but the path between them never feels like filler.

The events at the end of Pantomime force Micah into hiding again, this time with Drystan at his side. Drystan calls in a life-debt from the disgraced magician Jasper Maske to secure a hiding place at the dusty Kymri Theater, and thus begins Micah’s second adventure. Again, Micah goes into hiding. Again, Micah takes on a false identity. But the difference in Shadowplay is that he does so in plain sight. And at night he has a place to return to where people know who he really is and accepts him for that. I loved that nuance.

One area ripe for exploration that was missed, though, was Micah’s new identity. In the city of Imachara, while outside on the street, Micah wears a small piece of Vestige which makes him appear to be Temnian. In the book, Temnian people are coded as people of color; visibly foreign and visible different—“from the colonies,” mistrusted. As Sam (Micah’s name when passing as Temnian), Micah should face structural oppression. Unless Ellada is much further along in terms of race relations than we are in the real world, this should probably have been more than a couple of scowls on the street as mentioned in the text. This oversight is compounded when Cyan, an actual Temnian girl, joins the group. She either never speaks of whatever structural oppression she faces or she never experiences any. She seems to have no feelings on the matter that these two White kids are passing themselves off as Temnian. I’m not saying she should be bothered by it, necessarily, but she probably should have had an opinion on it one way or the other. In any case, there is a potential for this element of the book to rub readers of color the wrong way since Micah is literally using race as a costume for large sections of the book without any substantial reflection of what that means.

That said, I did truly appreciate that in Shadowplay Lam began to unweave Micah’s intersexuality from his apparent special abilities around Vestige*—which become more pronounced in this book. We learn more about that in Shadowplay; the Phantom Damselfy herself becomes a prominent character with a name and a history and a future. We also learn that there are others with similar abilities in Micah’s world. It’s confirmed more than once over the course of the book that it may just be coincidence that Micah is intersex and has these abilities. Micah is allowed to be just Micah.

Shadowplay is excellently paced and explores a different part of Elladan culture than Pantomime—magic shows and seances. I, actually, am fascinated by the historical spiritualism movement and the practices of debunking seances, so this was an oddly perfect match for my interests. Between Micah’s Phantom Damselfly induced visions, magician training, and tracking down people who are tracking down him, there is plenty of plot to go around. There are double agents. There is a slow-burning, very sweet romance, but not before the trauma of the ending of the first book has to be dealt with and processed by both Micah and Drystan. There is the question of Micah’s weird abilities and the potential and the danger they pose. And there is a hell of an ending and the questions it raises

I cannot wait for Masquerade**.

* If Lam’s interactions on twitter are any indications, and I can’t imagine why they wouldn’t be, she appears to be a lovely and reflective person.

**Also, I the behind-the-scenes story of the third Micah Grey book is a pleasure in and of itself.

I have heard nothing but good things about Pantomime by Laura Lam, and the book earned every good word I heard about it. Pantomime tells the story of Micah Grey, who was once Iphigenia Laurus: an intersex teenager raised as a girl who runs away to the circus when her parents decide to surgically alter her to make her ‘marriageable’ against her will. Once on the run, Iphigenia takes the name Micah, passes herself off as a boy, and joins a circus. At the circus, Micah begins training as a replacement for the circus’ aging male acrobat.

Micah’s voice is beautifully written. Lam captures the confusion of adolescence, the way Micah’s gender and biological sex adds to that confusion and isolation, and the anger Micah feels when he realizes that being intersex shouldn’t isolate him from those around him but does. At the same time, Micah begins a relationship with female his acrobat partner, Aenea, while nursing a crush on the White Clown of the circus, Drystan. Micah’s burgeoning bisexuality provides another welcome thread of the book, which Lam handles with sensitivity and grace.

The circus itself is presented as a microcosm, a little world unto itself, full of history that Micah has to learn, and full of possible dangers as well as new experiences to explore. Micah endures hazing. Micah learns who in the circus to watch out for and who is safe. Meanwhile, news that Iphigenia Laurus has run away spreads through town. Some in the circus put the pieces together; some do not. Micah must learn who he can trust and who he cannot. Some learn his secrets, and he learns theirs. The theme of secrets—the power they hold, the destructive force they ultimately represent—is a present all throughout the book. That theme comes to a devastating, heart-wrenching set of climaxes at the end of the book.

Pantomime is fits squarely in the genre of fantasy. The worldbuilding is excellent and doled out in enough small doses to stay interesting without ever being overwhelming. Each chapters starts with an epigraph from some fictional work which provides some context about the Archipelago, the region in which Pantomime takes place. Micah’s past as Iphigenia gives him an education on Ellada’s (his country) history and political relationship with its outlying colonies. Slowly, Vestige is introduced—magical artifacts from some time long past which work sporadically. The circus uses them for entertainment value, but Ellada once used them as weaponry. Micah, for as yet unknown reasons, has a strange and powerful relationship with the remnants of the culture that produced the Vestige artifacts.

Honestly, if there’s anything to critique about Pantomime, perhaps, it’s that last point—by the end of the book, it’s increasingly clear that Micah is, in some mysterious way, special, and that this specialness is tied to his being intersex. This, I’m sure will get extrapolated in the book’s sequels, but I can’t help but think that the book would have been stronger, and would have made more of a positive statement about intersexuality, gender fluidity and bisexuality if Micah had just been…Micah. Not chosen, not magical, just Micah—an acrobat who is complicated and trying to grow up in a complicated world. But all that said, the book was still lovely, and I am very curious about the Penglass, so I’m already halfway through Shadowplay.