Rabatha is a bustling city, a place of great political clout, nestled in the heart of the desert Empire. It is an urbane city: universities, libraries, art galleries, exotic markets, the very first clockwork train station. It is the jewel of the Empire. And it also has ghettos.

Ariah, because the Qin have deemed his skills useful to a point, is able to catch glimpses of both sides of Rabatha. He lives in the Semadran districts, but he works in the Qin areas, so he sees this contrast between how his people are forced to live compared to the Qin.

Ariah’s experience of Rabatha is very loosely based on my own experience living, for a 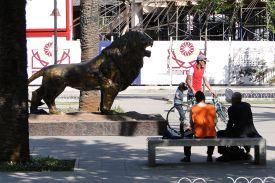 short time, in Fez, Morocco. I spent time there as a study abroad student in a program focused on cultural psychology; half the time in the program was spent there, and the other half of the time was spent in Tartu, Estonia. It was an immersion program—we learned what we could of the languages (I was terrible at that) and had homestay placements. We took history courses and modern culture courses. We were mostly white college students, and we were cultural tourists, and we bore our immense privilege on our sleeves most of the time. I am exceedingly grateful for the experience.

Morocco stuck with me. It has a deep and fascinating history—every place does. But something about it really stuck with me. My homestay placement was with a family who lived in the new part of the city, the part of the city that had been built by the colonial French. They lived in a beautiful modern apartment—top floor, overlooking the entire city, with a beautiful view of the mosques with their reaching minarets. I remember the building had a doorman. I remember feeling some class shock at that growing up the way I did in the States. I spent most of my time in the medinas, the old city, with its winding narrow streets with walls so high it seemed always in perpetual twilight. The medina was the original Fez, but when the French took the city they forced the Moroccans to move there—all of them. It became a ghetto. It still is a ghetto; the people there are uniformly poorer than the family I stayed with. Poorer and more traditional—the women there wore hijabs; the women in the family I stayed with did not.

But it gets more complicated than that. If you dig further into the medina, you find the mellah. There was a period when Jews lived in Morocco, and at that time, they were forced into ghettos of their own, these small pockets of blue-washed walls where they were separated from the rest of the population. They are haunting places.

I think about these evolving relationships—new city, old city; new city, medina, mellah—quite frequently still, ten years later. It was this complexity I wanted to capture in the fictional city of Rabatha.