I’m excited to have Brian C. Baer stop by my blog today and answer a few questions about his novel, Bad Publicity!

Brian C. Baer is a graduate of the Creative Writing program at Eastern Washington University. After teaching English in Prague, London, and Manchester, UK, he has now settled in Spokane,
Washington. Bad Publicity is his first novel. 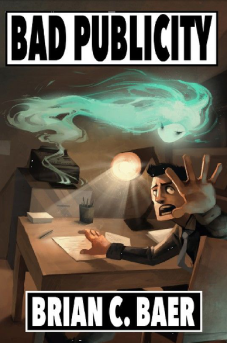 A major theme in Bad Publicity was secrets–their commodification, their destructive potential, the ethics of uncovering them versus leaving them alone. Can you speak to this what drove you to write about this?

Secrets and that hidden side of everyone has interested me for as long as I can remember. That, along with an interest in journalists, can probably be blamed on reading Superman comics as kid.

Everyone has secrets; they can be simple and benign or very much the opposite, but they are always nobody else’s business. Still, nothing is more intriguing. Modern day “entertainment journalism” struck me as the best way to explore this sort of voyeurism.

I didn’t get into the details of the ghosts or Fitzgerald’s gifts in the book, because those ideas are just so cool and I didn’t want to sidetrack the main story too much. To me, the ghosts are just a series of echoes. When you die, you can’t do anything new, but the person you were and the things you did keep ringing out. What makes Madame Blue different is a sense of agency; she is very much stuck in that one facet of her personality, but she has more control and can make more of an impact. And she gets this power from (what she perceives to be) love.

‘Sensitivity’ is actually the best word for what Fitzgerald does. He’s sensitive enough to hear those echoes, but not strong enough to keep himself separate from everything he hears. He’s an overly sensitive guy who loses himself in the thoughts of un-real people. In other words, he’s a writer.

Which came first–Jackson Hardy being a tabloid reporter or the ghosts? Or did the two sides of the plot develop together?

Those two concepts were there from the get-go. The book came from a short story I wrote about a ghost love-triangle. Jackson has this ghost he uses for his job, and the two of them developed a relationship without him realizing it. She fawns over him, but she also fills a void in his life. Then he meets a cute girl and everything goes to hell. Those two’s connection is what made me want to expand the story more.

What are you working on right now? What should readers look for from you next?

I’m in that fun process of struggling to write and over-thinking the sophomore project. I’ve been doing some travel writing and blogging for the ComicBookMedia.com site in the meanwhile, but I’m finally buckling down and working on the next novel. With any luck, it’ll be a slacker farce full of cults, military-industrial complex conspiracies, and slightly too much nostalgia for the mid-90s.

How can readers stay in the loop and get news about your projects and releases?

Do you have any final thoughts or words of wisdom you want to share?

Just “Never trust anyone who offers you words of wisdom”.

FTC disclosure: I received a free digital copy of this book in exchange for an honest and unbiased review.

Bad Publicity, by Brian C. Baer, is a modern twist on the hardboiled noir detective story. The book centers on Jackson Hardy, a grizzled alcoholic unraveling a mystery who contends with his fair share of femme fatales and massive thugs. It all sounds very Dashiell Hammett except for the particulars.

Jackson Hardy isn’t a P.I.—he’s a tabloid reporter, and he’s not a very good one on his own.* One of the femme fatales is a ghost named Madame Blue who feeds him his sordid tidbits about movie stars. It’s these clever subversions that make Bad Publicity worth reading. Where noir literature was always a wry satire of its times—a reflection of the lose-lose nihilism of post-Depression American life—Baer’s writing sends up today’s empty fishbowl fascination with celebrity culture. To this end, making Hardy a tabloid reporter is a brilliant update of the genre.

The book follows Jackson Hardy as his use of Madame Blue (by way of an unplugged fax machine) lands him a string of high profile tabloid stories. But with those stories come ruined careers and retaliation from the movie stars he writes about. As Jackson digs deeper with Madame Blue’s help, things get stranger, questions about these celebrities pile up, and the plot twists and turns.

The structural criticisms that can be leveled against Bad Publicity are largely the same ones that can be leveled against noir fiction in general: the women characters lack dimension, and its cast is as White as fresh-fallen arctic snow. In updating the conventions of the genre, Baer could have included some diversity to his cast. Regarding the female characters, a case could be made that Jackson is, for much of the book, a drunk and emotional mess, and therefore an unreliable narrator in terms of what these women are actually like. No such excuse can be made for the lack of characters of color, though.

That said, the characters we get are well-drawn enough that they held my interest. I was particularly impressed by Jackson’s evolving relationship to Madame Blue, who grows stronger and more corporeal over the course of the book. Also of interest was Fitzgerald, presented as Jackson’s one stable friend over the course of the book.** And, last but certainly not least, a brief interlude where we meet Jackson’s estranged ex-wife proved extremely enlightening. Layla was a fascinating creature who deserved her own book, in my opinion, and enriched this one.

If you’re looking for a well-paced paranormal thriller with roots in hardboiled detective fiction, Bad Publicity will scratch that itch.

*At least not when he’s drunk, which is usually the case. When he dries out, he proves he can do the legwork without Madame Blue’s help.

**Sadly, this never panned out, but I shipped it.