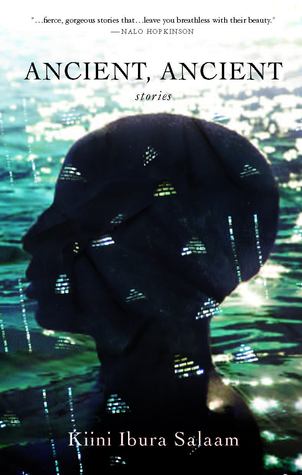 Notes on Diversity:
This is another case where diversity is not really the right word to use here.1. This is a book of stories where, with one or two exceptions, the focus is on Black womanhood. Sometimes those Black women are in space. Sometimes they coexist alongside gods. Sometimes they live in New York and are beset by nostalgia for Louisiana. Sometimes they are aliens who communicate through dance. But unifying the collection of stories is a deep exploration of Black womanhood. It is a book written within a lived experience for others of that lived experience. It reminds me, in that sense, of Constance Burris’ Black Beauty.2

All philosophizing aside, this book is full of characters of color. And women. And it has some queer representation.

Review:
Salaam is a lovely, poetic writer. From her language choice to the actual structure of the stories themselves, most of the stories in this collection are lyrical and haunting.

One of the clearest themes throughout all the stories is sex, which in virtually all cases3 is a powerfully positive and healing force in women’s lives. In stories like “Desire” and the trio of stories featuring the unnamed alien race represented by WaLiLa and MalKai who feast on human nectar (that is drawn out by way of sex), sex and sexuality is arguably coerced–but still, the power of it and the emotional connection it brings proves healing. Or at the very least complicated. The women in the stories remain agentic throughout even when used as vessels.

But I was more drawn to some of the other themes woven through the stories.4 Movement-as-freedom and movement-as-communication comes up again and again. Most clearly in the WaLiLa and MalKai stories, where WaLiLa and MalKai must learn to forsake their original language of movement/dance for spoken human languages, and again in “Battle Royale.” In “Battle Royale”, the narrator’s insistence on engaging in the flashing game/dance of razors leads to the fever-dream punishment meted out by his grandfather. But movement, or the lack of it, and how it can bring a different kind of freedom comes up in “Debris”, too.

There is an openness in Salaam’s resolutions that I enjoyed. Many of the stories were about a change of direction, a decision point, and were other writers would tell you where the characters were going, Salaam refuses to reveal what happens next. The conflict was that there was a decision to make, she seems to suggest. The trick of her stories is that there emotional gratification in knowing that a decision was made, but we don’t know which path was taken.

Salaam’s stories are fascinating. In particular, I liked “Debris”, “Ferret”, and “Ancient, Ancient”. “Rosamojo” was hard for me to read–I found it triggering–but it is a very good story.

1I need to write this post already about My Issues With The Word Diversity.
2Although, if you’re into short speculative fiction featuring Black characters you should really check out Black Beauty, too.
3The exception to this is “Rosamojo”. It is a very good story, but if you are triggered by sexual assault, especially as a survivor of childhood trauma, tread with caution.
4I’m ace, man, I’m not getting the same sex-as-rapture thing these characters are getting.