Scylla and Charybdis are sea monsters, but they didn’t start that way. In “Real Monsters,” Scylla tells her story. In Scylla’s version of events, what lies between Scylla and Charybdis is not death and destruction but a radical and vibrant love story.

The story of the story:
I wrote this one to a call for stories featuring queer women and the theme “over and under the sea.”

I had that call banging around in my head when I went on a trip with my ex to meet her family. That trip didn’t go well; her family could not get my preferred pronouns right, nor did they seem to have any interest in doing so. Not a queer friendly situation, much less trans-friendly.

The idea came to me very suddenly, born out of I’m not sure what, but the upshot is that I ended up in a crappy little Starbucks looking up elements of myth about Scylla and Charybdis while I sketched out the plot. I wrote the thing in a single sitting, there in that Starbucks, the day we left her family behind and started another leg of the trip. Writing it was an act of catharsis, an exorcism of vicious defiance I’d been carrying for days.

Placing the story:
This one wasn’t easy to place. It’s a retelling of Greek myth, still with the same setting but told in modern colloquial language and subrversively recast. It’s kind of spec fic but kind of not–there are sea creatures and gods and goddesses, but it’s a Greek myth retelling and those are often perceived to be tongue-in-cheek literary as often as not as well. It was another one that was, frankly, just kind of…weird.

I sent it to the lit mag that issued the call, and was rejected. I sent it to a couple of spec fic lit mags, and was rejected. I tried a literary lit mag that had a call going for a fanfic-y type thing, and this piece seemed to fit, but was rejected. I saw Cactus Heart listed on Lambda Literary, and their mission statement said they were after “spiny writing & art—sharp, relentless, coursing with energy and able to thrive in the harshest of places, all while maintaining a vulnerable, succulent interior.” Hell, I thought, this one is spiny and vulnerable. So I subbed “Real Monsters” to them, and they took it! An ethos fit, I’d call it.

A few months later I saw the call from Lethe Press for submissions to their annual Heiresses of Russ collection–reprints of lesbian fiction from the past year. I sent them “Real Monsters” and “Beneath the Dane Hills” for consideration–both fit the bill–and they chose “Real Monsters”.

I am honored that my story, “Real Monsters”, is included in Heiresses of Russ 2015: The Year’s Best Lesbian Speculative Fiction.

The fact that my story is sandwiched between Nicola Griffith’s “Cold Wind” and Alex Dally MacFarlane’s “Because I Prayed This Word” gives you a sense of just how excellent this collection is.1 Again, I’m truly honored, and if queer spec fic is your thing I encourage you to check out the anthology!

About the Anthology
Stories about lesbians, women who choose women as primary partners, lovers, playmates, and co-conspirators, tend to go where few men have gone before. Most of the real-life issues that lesbians must deal with, as women and as members of non-mainstream communities, appear in these stories in metaphorical form or as plausible scenarios in a future or alternate world. Lesbianism itself was routinely described by the conservatives of the past as “impossible.” The formula of “woman + woman” is thus logically connected with other phenomenon formerly considered impossible: magic, witchcraft, folk cures, scientific discoveries, alternate methods of producing offspring, space travel, communication with beings who are not human or not living in human bodies, historical accounts that have been suppressed or denied. The Heiresses of Russ series seeks to offer readers the best lesbian-themed speculative fictions stories published the prior year.

1Ok, full disclosure: when I saw the table of contents I was a bit flabbergasted that my story had been selected. Probably I wouldn’t even have sent in a story for consideration if I’d known all of these incredibly talented authors I admire so much were in the running. (I have major writer Imposter Syndrome).

My short story, “Real Monsters” is now available for purchase on Amazon for $.99, but is available for free to those who subscribe to my Author Newsletter! Story blurb is below: 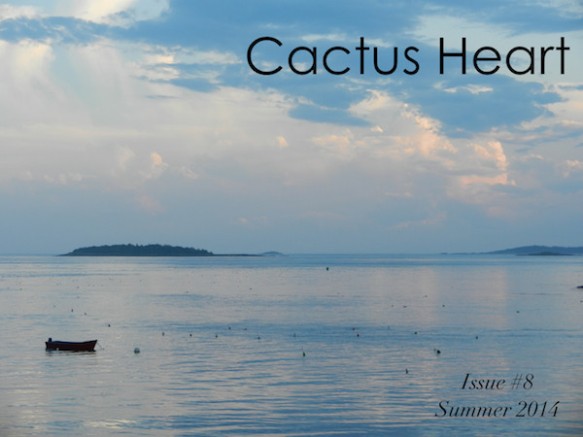 It’s my great pleasure to announce that one of my short stories, “Real Monsters,” is included in Catcus Heart issue #8! The issue is available for purchase here. Here’s the story’s synopsis to whet your appetite:

Scylla and Charybdis are sea monsters, but they didn’t start that way. In “Real Monsters,” Scylla tells her story. In Scylla’s version of events, what lies between Scylla and Charybdis is not death and destruction but a radical and vibrant love story. “Real Monsters” is a 3,600 word short story that uses Greek myth to interrogate what some conceive of as monstrous forms of love.

Cactus Heart is “devoted to spiny writing & art—sharp, relentless, coursing with energy and able to thrive in the harshest of places, all while maintaining a vulnerable, succulent interior”, and I believe “Real Monsters” fits that description well. This story was written fast: in a single sitting at an out-of-the-way Starbucks. In the preceding days, I’d had more than my fair share of brushes with homophobia and transphobia. I’d been put through the emotional wringer, and I was angry. This story poured out of me, a self-validation, an expression of unreserved and defiant queerness. I am glad it’s found a home.