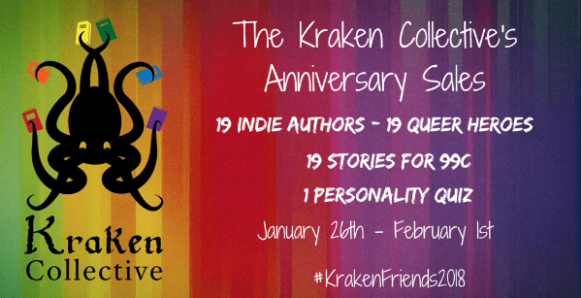 Hi friends! Did you hear about the Kraken Collective Anniversary Sale? We’ve got 19 books on sale featuring awesome queer heroes, and each of them are only $.99! Not sure where to start with all these stories? Take the #KrakenFriends18 quiz, and see which queer hero you get!

It is my distinct honor to feature two of the participating authors on my blog–Amy McNulty and Lauren Jankowski. Today, we have Amy McNulty. Her book, The Ballad of the Beanstalk, is out now, and is a very cool retelling of an old fairy tale. Keep reading for an excerpt of her book and an interview with her!

Title: Ballad of the Beanstalk 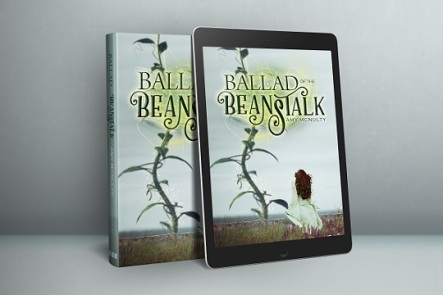 As her fingers move across the strings of her family’s heirloom harp, sixteen-year-old Clarion can forget. She doesn’t dwell on the recent passing of her beloved father or the fact that her mother has just sold everything they owned, including that very same instrument that gives Clarion life. She doesn’t think about how her friends treat her like a feeble, brittle thing to be protected. She doesn’t worry about how to tell the elegant Elena, her best friend and first love, that she doesn’t want to be her sweetheart anymore. She becomes the melody and loses herself in the song.

When Mack, a lord’s dashing young son, rides into town so his father and Elena’s can arrange a marriage between the two youth, Clarion finds herself falling in love with a boy for the first time. Drawn to Clarion’s music, Mack puts Clarion and Elena’s relationship to the test, but he soon vanishes by climbing up a giant beanstalk that only Clarion has seen. When even the town witch won’t help, Clarion is determined to rescue Mack herself and prove once and for all that she doesn’t need protecting. But while she fancied herself a savior, she couldn’t have imagined the enormous world of danger that awaits her in the kingdom of the clouds.

A prequel to the fairy tale Jack and the Beanstalk that reveals the true story behind the magical singing harp. 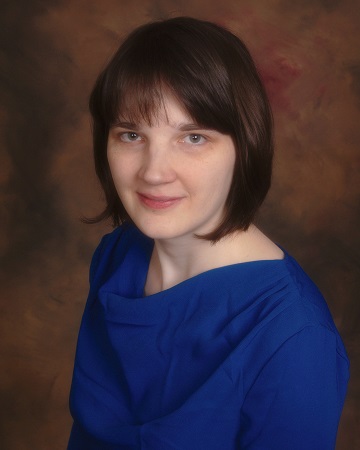 Hi Amy! Tell us about yourself as an author. What kind of stories do you tell? And why?

Hi! Thanks for having me. I’ve always been drawn to YA stories, particularly those set in fantasy worlds. Most of my YA books thus far are fantasy (though I write contemporary romances under a different name, too). I love rooting for complex, romantic fictional relationships, so most of my books have a strong romantic element as well. I also love strong-willed (sometimes to the point of stubbornness) lead characters, so I write a lot of those.

Clarion is the featured character in BALLAD OF THE BEANSTALK. Can you talk a little bit about her and what makes her tick?

Clarion is going through a rough patch in her life. She’s tried of always being taken care of by her friends and lover, and she’s ready to break away on her own. She wants to go on an adventure and be the one to protect those she loves.

What drew you to this story?

I’ve always wanted to do a fairy tale retelling or prequel/sequel, and I never would have expected Jack and the Beanstalk to be the one that called to me. But I was watching an adaptation of the Jack and the Beanstalk story and was struck with the idea of telling the origin of the singing harp (which sometimes appears to be part human in certain adaptations). The story snowballed from that idea.

What do you have coming up next? How can fans and readers stay up to date with your work?

My next release is Fangs & Fins, Book One in my new YA paranormal romance/urban fantasy series, Blood, Bloom, & Water. It’s out May 1st and it’s got high schoolers, vampires, and merpeople. Visit my website to learn more (http://amymcnulty.com/). 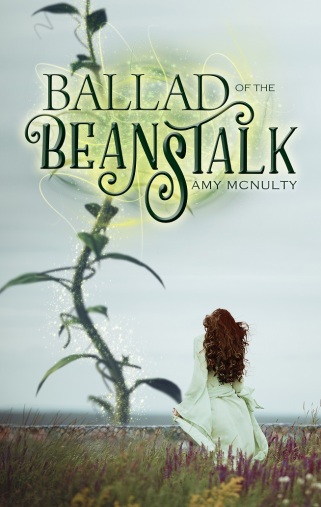 inside her room. A maid was unfolding gowns and spreading them out on top of Elena’s bed.

“Thank you, Mariah, that will be all for now,” said Elena, clasping her hands together. “Clarion will help me. You’re needed in the kitchen.”

Mariah hardly looked up from the floor as she passed, but Clarion swore she spared her one scathing look, as if she knew she was responsible for the swap in jobs—or worse, she knew exactly why Elena had dismissed her.

Once the door shut tight behind Mariah, Elena threw her arms around Clarion’s shoulders and kissed her.

Elena marched over to her bed and began making a mess of the careful array of clothes. Clarion fingered her lips and watched her. “Elena,” she began, not sure how to even start this conversation.

It wasn’t like she didn’t love Elena. When Elena had first asked if she could kiss her, Clarion had said she could. Elena was beautiful, and although she’d known her since almost as long as she could remember, although she loved her as a friend first, as someone like a sister… Something had changed between them at some point, and Clarion was just as curious as Elena as to what that might be. But that was months ago—almost a year ago now—and Elena no longer asked. There’d grown an understanding between them, and Clarion wasn’t even sure she really understood.

“Did you decide against that silly notion of wearing your one nice frock?” Elena held up a pretty blue dress made of smooth material that deepened her already deep blue eyes. Her arms fell and her face soured. “Unless you seriously intended to run home and change after a day of cleaning.” She tossed the dress down and picked up another one, this one in golden yellow. “I can’t imagine why your mother thought it suitable for you to help clean for the ball!”

Clarion bristled at Elena’s tone. “Everyone celebrates at the springtime ball. Even those who helped set it up.” It was true. There weren’t enough rich people for the mayor’s family to hobnob with them exclusively. Although that may have been why this neighboring lord and his son were invited.

Her face distressed, Elena lowered the yellow dress. “I didn’t mean that.” She folded the dress over her arm and started scattering the other ones. “That you wouldn’t have come if you helped clean.” She smiled timidly. “It’s just… You’re my friend. You shouldn’t have to clean to earn your respite.”

Her friend? There was some of the confusion beneath the “understanding” the two of them shared. Clarion regarded Elena’s profile as she tossed some of the dresses atop a chest at the foot of her bed. She had an elegant, sloping profile that sometimes made Clarion’s heart beat faster, but it’d been a while since she’d felt that.

Her heart quickened only a little now.

Elena sat on the bed on a small area she’d cleared of dresses. Her usually-proud features softened as she held her hand out, beckoning Clarion to sit beside her. Clarion hesitated a moment, but she did as wordlessly bidden, sliding her hand into Elena’s.

“Father is trying to arrange a marriage between me and that Magnus.” From the way she emphasized Mack’s name, Clarion knew the young man did not have the same effect on Elena as he did on her.

But Clarion’s mind jolted as she pondered it. The two of them together would be the loss of both people—the only two people—who had ever stirred something inside her, something strong, something special.

She felt immediately guilty for thinking that of two people. She removed her hand from Elena’s and folded her hands in her lap instead.

Elena mistook the meaning behind the gesture and grabbed Clarion by the shoulders. “I don’t want to!” She threw her hands up. “I was thankful Father didn’t think any of the boys in town were good enough for his daughter.” She twirled a coil of her silky hair around her finger. “I should have known he would just import me a husband from somewhere else.”

She stopped playing with her hair and spoke hesitatingly. “What if… I don’t know. What if you married Jackin?”

“What?” Clarion choked on her astonishment.

“I know, and I know that Father probably wants to import him a proper lady wife, too, but…” Elena spoke so quickly, her hands fluttering about her face, that she stumbled on her own words and had to pause to swallow. “But everyone knows how Jackin feels about you, and I could see him fighting Father so he can marry you, and maybe just me being married to Magnus would be a good enough family connection—”

“How Jackin feels about me?” Clarion thought back to when Jackin wound up asking Krea to the dance. Krea, at least, had no idea how Jackin felt about Clarion. Frankly, Clarion had hoped she’d just imagined it. Even Elena had never brought it up, never encouraged it.

Although she had reason before not to encourage it.