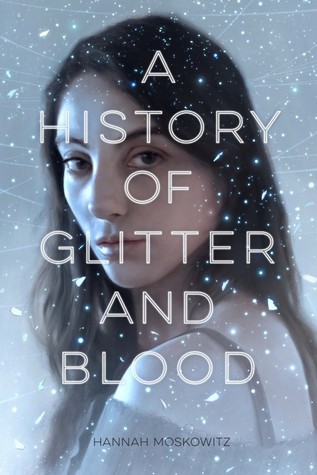 Notes on Diversity:
Are you looking for a book about a bunch of queer teenage fairies who are completely cool with the fact that they are queer? This is your book. This book is extremely, sweetly queer, unapologetically so, with nary a coming out story or struggle with identity in sight.1

The book also explores physical and mental disabilities in great depth. Because A History of Glitter and Blood is set in a fairy-gnome-tightroper war (more on this in a second) characters get wounded, irrevocably, in both visible and invisible ways.

There’s some latent class issues in the book2, but they weren’t quite fleshed out. There’s a subtext there that could be read between the lines, though. In terms of racial diversity, there’s not much on the page either way. Beckan, the protagonist3, seems canonically White given both the cover and the interior illustrations. But no clear physical descriptions are given of the other characters, and you could easily headcanon virtually any of the other characters as virtually any race.4

Review:
The thing you have to understand about fairies is that they’re not very good at writing history. The other thing you need to know is that fairies are fickle.

The last thing you need to know is that there are four pesky, defiant young fairies in Ferrum who don’t want you to understand those things. When war breaks out between the gnomes underground and the tightropers up in the air, the fairies are caught in the middle. And the fairies decide to abandon their city–all except for Beckan, Josha, Scrap, and Cricket. The four of them ride out the war together, as a little wolf pack, scraping by on their wits and their bodies and their dependence on each other.

I won’t tell you anymore of the plot besides that except to say that this isn’t a story about ending a war, it’s about surviving it. Literally everything about the book, from the structure to the narrative choices, to the illustrations, is about survival. This is a book, I think, about grief and self-forgiveness, and ultimately, hope. It is, at its heart, a deeply bittersweet thing.

A note about the structure. If you’re not expecting it (and I wasn’t5), the book will very quickly make you go like this:

My caveats for the book–which are frankly very few–are that I wish there had been more space for the worldbuilding. Not just to sate my idle curiosities but also because at times the radical messages in the text got lost below a level of (I am assuming unintentional) essentialism of some of the societies Moskowitz introduces. For example, a key plot point is that the gnomes can’t move forward after the death of their king until they crown a new one. They just…can’t. And even though there are prominent gnome characters in the text, this assumption (is it biological? cultural? Why can’t they? How hierarchical is their society if it’s so fixated on having a king?) is never really questioned. Again, I don’t think this was Moskowitz’s intent, but the full effect was that individuals within a society (but it gnome or fairy or tightroper) can transcend cultural paradigms, but only those certain individuals, and for very opaque reasons (youth, maybe?).

A second caveat–difficult to talk about without spoiling the book–is in regard to Beckan herself. A History of Glitter and Blood is one of those peculiar books that is, at once, deeply feminist and also largely populated by male characters. That means that Beckan shoulders a particular weight in the narrative. And when the narrative becomes unhinged, when it becomes clear that there are, essentially, multiple Beckans (a real Beckan that we, the reader sometimes glimpse, a possibly idealized Beckan on the page) this confuses her place in the narrative. For me, it raised questions of Beckan’s agency, her personhood. It raised a question of whether this was a novel that looked like it was about a girl but was really about a boy. And if that is the case, how much of the real Beckan was participating in the narrative?

I finished A History of Glitter and Blood in two days. I devoured it. I loved it. These are not fatal flaws, simply enough to give me pause. And that’s good–that means the book made me think and wrestle with it. The strengths of the book, for me, lie in its cleverness, its earnestness, its unexpected and very cool worldbuilding. I am definitely seeking out more of Moskowitz’s work.

This is a brutal, quippy, sweet book. Devour it if you can.

1Not that coming out stories or struggles against homophobia and/or heteronormativity are bad! They aren’t! But if you’re looking for some spec fic featuring queer characters where that’s not the focus, then this serves that right up.

2Among the fairies, there seems to be an initial, or implied, class divide between Beckan and Josha on the one hand and Cricket and Scrap on the other. Before the war, I gathered that Beckan and Josha lived in a nicer part of Ferrum than Cricket and Josha. But it’s unclear what that means to fairies. More broadly, there were definite class tensions between the fairies (a literal upper class, living as they did above ground) and the gnomes, who lived underground and did the fairies’ grunt work. These tensions were only lightly sketched as a loose premise for the war to come. Again, there are these underpinnings in the text, but neither level is built out in much detail.

4This is something, but it’s just a little something. Having the space to headcanon any way you want is better than being told everyone in the story is White for sure, but it’s still not as nice (I would guess) as having a character explicitly marked as someone who looks like you.

5All I knew was that people I respected on Twitter said this was a Good Book. And it looked cool. It had queer fairies in it? So I picked it up. I have no idea if there was any discussion of the weirdness of the text in the bookosphere, of Moskowitz’s authorial choices on structure, etc. I usually do this. I impulsively buy books based on instinct and very little else so I often miss whatever context there is surrounding a lot of books I read.