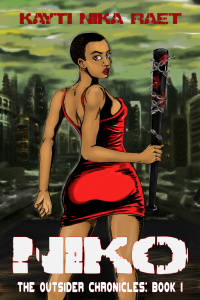 Notes on Diversity:
This book is packed with diversity. It is Diverse with a capital D. The main character is a take-no-shit suffer-no-fools Black teenager, and most of the people around her are other people of color, too: brown folks, East Asian people, South Asian people, they run the gamut. There are kickass queer characters. There are characters with disabilities. Class issues are on display. Diversity is truly firing on all cylinders in Niko.

Honestly, the author’s attention to issues of diversity in both the characters and the worldbuilding is what moved this from a 3 star to a 4 star rating. It wasn’t only that diversity was present, but how it was woven into the overall book: there is great nuance present here that shows that Kayti Nika Raet thought long and hard about how diversity in fiction ought to be represented. The racial and gender diversity, for example, was presented without comment. The issues of disability became plot threads, things to dissect. Very well done.

Review:
FTC disclosure: I received a free digital copy of this book in exchange for an honest and unbiased review.

Harmony Niko is seventeen years old and trapped in a nightmarish post-apocalyptic wasteland full of pseudo-human monsters called Slithers that want to eat her and acidic rain that will kill her if she does not find shelter from it. She is responsible for keeping herself and her two younger brothers alive. But while out on a foraging run everything falls apart–she comes back to find her dilapidated house in flames, her youngest brother dead, and her remaining brother missing. She wakes up in Amaryllis city, now part of a circle of Slither killers.

Once in Amaryllis city, Niko’s world falls apart. Things she took for granted–that Slithers can be easily killed with the right weaponry and good luck, that clean water is precious and must be hoarded–are suddenly called into question. Niko struggles to find her place in the Rose Circle, the group of Slither killers who have adopted her, while trying to process all the new information thrown at her. At the same time, she forms a plan to get back outside Amaryllis and find her lost brother.

Kayti Nika Raet anchors the plot on Niko. As an author, she places all her eggs in one basket. Niko as a character is fully realized, possessing a broad range of emotionality and a strong, driving voice that carries the narrative forward. Niko is intense, observant and suspicious. She is shaken and vulnerable and ferocious. She is a lone wolf and a caretaker. Raet writes Niko with lovely subtlety, letting her grow and stretch over the course of the book. Niko at the end of the book is very different than she was at the beginning. She is still very much herself, but the course of events has marked her, and she is changed.

It is probably obvious that I connected to Niko’s character. Every beat of Niko’s character felt true for me because I was so much like Niko at eighteen: lost, full of bravado, failing an even more lost younger sibling, coping with unnamed and unrecognized PTSD. Raet’s writing captured a resiliency and a woundedness that is utterly complex, at once strong enough to keep going and also weak enough to be self-destructive. And, at the same time, the book is full of science fiction conceits that are intriguing. The hints dropped about the weird, haunting, body-horror Slither monsters are not resolved in this book, and are definitely interesting enough to keep me hooked. I’ll be picking up the next installment, Harm.

Most of the other characters lacked Niko’s complexity, which was one weak spot in the book. Malik, one leg of a very light love triangle, shows some depth, and as a set Norm and Lo were definitely interesting, but most of the other characters blended together. Perhaps as an extension, there are scenes where the action is somewhat unclear. Raet’s writing is typically very crisp, but sometimes I had to reread sentences to glean what happened when several characters were interacting around Niko. A less dedicated reader may have skimmed or skipped those sections altogether. One section where this happened actually turned out to be important plot-wise, but I initially missed who had upset who.

Bottom line, though, I really, really enjoyed this book. It was a fast and brutal and brilliant read, just like Niko herself. When I found out there were three other books in the series already I wanted to clear my schedule and read them all back to back.