I think I’ve mentioned it here before, but by training I’m a statistician. I don’t live off my writing, and in my day job, I work as an analyst for a large urban school district crunching numbers. Back in grad school, I taught stats to undergrads who would really rather be anywhere else, bu I like stats. Always have. So I read Nicola Griffith’s post “Books About Women Don’t Win Big Awards: Some Data” with great interest. The first thing I thought of when I read is was I bet this replicates with other marginalized identities. I bet it’s not just gender; I bet it’s race and sexuality and class and everything else, too.

I had some time this weekend. Not much, but enough to do a little digging. I did what she did–mostly–but for race. I looked at four out of the the six prizes she looked at* for the same time span she looked at (2000-2015) and coded whether the author was White or a Person of Color. I dug up what I could on the book in question to try and figure out, if I hadn’t read it (and I hadn’t read most of them), if the protagonist(s) was White or a Person of Color**. And then I crunched some numbers. Here’s what I found:

That’s the high-level TL;DR summary, there. I’m going to roll up my sleeves now and dig into the data now. Stick around if you’d like! To start, here are the four awards I looked at:

You can see that the trends are remarkably consistent across the awards. The NBCC is the only one coming close to bucking that trend–NBCC was more likely to give the award to POC authors and to books featuring POC protagonists written by White authors. The Man Booker Prize, on the other hand, was the most blindingly White of the bunch. This mirrors quite closely what Griffith found with regard to gender: Man Booker had the highest number of awards given to men who wrote about men, and NBCC gave a relatively wider spread of awards to men and women writing about men and women. 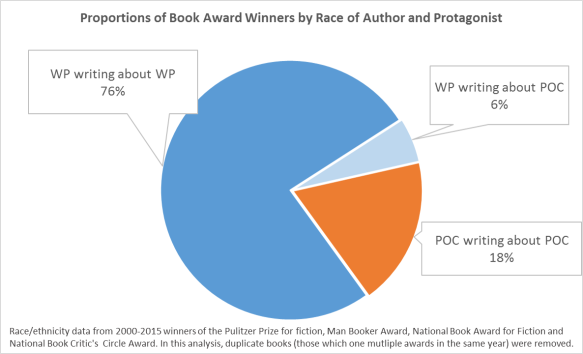 The pie chart above collapses all the awards I surveyed across the award giving body to get an aggregate sense of race trends. There are two main points of interest here: first, that over 80% of awards for the last 15 years of these four major awards have gone to White writers. 80%–FOUR FIFTHS.

note that the women author’s pie graph is smaller. That’s on purpose: men (regardless of race) won 60% of the awards in the time span looked at.

For my final trick, I overlayed Griffith’s analysis and my own. I coded my set of data for both race and gender of both the author and the book’s protagonist to see how the two pieces of demographic data interacted (because, you know, intersectionality matters).

The graphs above split out the combination of the author’s race and gender and their book’s protagonists’s race and gender. The graph on the left shows the proportions for the men winners (60% of the dataset). The graph on the right shows the proportions for the women winners (40% of the dataset). What the above data tells me is that White men write about anything and everything and get awards for it. Mostly they write about other White men, yes, but they are the ones crossing gender and race lines most in their writing and get awarded for it.

I would have liked to do more. I wanted to add sexuality into the mix, but it was very hard to determine author’s LGBTQ status with just a cursory internet search. Only two of the winning books, Middlesex and The Line of Beauty, were book that I knew dealt with LGBTQ themes. I would expect similar patterns to emerge should that data become available, though.

*Griffith also looked at the Hugo Award and the Newberry Medal. I excluded these from my analysis due to time constraints which is a fancy way of saying ‘then I had to give my kid a bath.’

**There were some cases, like The Road, where movie adaptations of an arguably non-race-identified protagonist was cast as White, which I then used as essentially canon evidence of Whiteness.