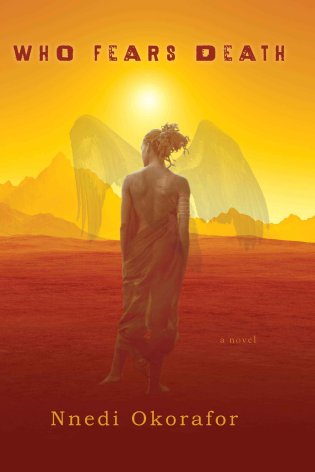 WHO FEARS DEATH, by Nnedi Okorafor, is not a book for the faint of heart. Told in retrospect to her captors by a woman facing execution—a woman who has changed the world around her in fundamental and unexpected ways and sacrificed herself to do it—the teller does not flinch away from the grisly and vicious details of her story. She revels in them. As much a book about hope and change as it is a book about the horrors of complacency, WHO FEARS DEATH is a book that embraces anger, and for that if nothing else, I loved it.

TRIGGER WARNING: The book has roots in the real-world history of weaponized rape in the Sudan. In the book, Onyesonwu is the product of militarized rape: her Okeke (Black) mother is raped brutally by a Nuru (White) sorcerer, and then her mother is rejected by her husband. Onyesonwu spends her early childhood in the deserts alone with her mother. Her mother notices the child has an affinity for juju—magic—and despite her child’s visible biracial features decides she has to seek out a township and raise her among other people. It’s not easy—people like Onyesonwu, the products of Nuru/Okeke rape are called Ewu and presumed to be inherently violent, inherently broken due to the means of their conception. Finding a village where they are accepted is the first of many battles here.

Onyesonwu grows up and grows into her magic. She becomes a shapeshifter. She demands to be mentored, going up against old barriers that would restrict her both about her being Ewu and a woman. She falls in love. She builds friendships. She learns that her world is being torn apart; she learns of a prophecy that she might be the one to heal it. She goes through an initiation that reveals her own death and unlocks her powerful magic. She prepares herself for the inevitable showdown with the powerful force of a man who created her. Across the narrative, the book manages to tackle genocide, rape, female circumcision, cultural relativism, colorism, and a host of other issues with a deft hand. Onyesonwu’s voice is always harsh, always sharp-tongued and brutal. Always questioning.

Onyesonwu was a narrator I related to immediately. She was so brash, so defiant. So deeply capable of love, and at the same time so reactive and defensive. Entitled and yet so used to being refused. So angry. I loved her anger. I was moved by anger. I connected with it. The book exulted in her anger. It was always her greatest strength. When it was positioned as a weakness—and occasionally it was—it was always done so by the men around her, and thus the weakness they claimed was undercut by the fact that they saw her as an obvious threat to their masculinity. Even the love of her life, Mwita, her healer and companion, fell prey to this. But none of the women ever told her she was too angry. And when she fought for them, when she avenged them, the men did not think her too angry then. What I loved about this book was the subversion of that trope, that Angry Black Woman trope that is so often used to discredit the work marginalized women of color do. Onyesonwu locates the source of her anger here:

Humiliation and confusion were the staples of my childhood. Is it a wonder that anger was never far behind?

And then her mentor’s mentor, a man who intially underestimates her and tries to turn her away, validates the usefulness and power of that anger here at the close of the book:

Anger is an active emotion. It drives things, it pushes things. It can be abusive, and it can do wrong, but it can be a force for justice, too. Onyesonwu struggles with this in the book. Much of the book has her shaking people into righteous anger, fueling it, leaning into it and seeing it as a strength. And I loved the book for that.

Okorafor as an author also spends much of the narrative outlining how prophecies create their own ends. If you decide that Ewu people are inherently violent, and then you shun them and teach them they are evil and cast them out and leave them no choices but to turn criminal in desperation, then yes, she argues, you may see them resort to violence. If you cast spells on young women to make sexual arousal before marriage deeply painful and the spell only breaks with marriage then yes, the women of a given tribe might have a very peculiar relationship to sex and their husbands. And if you are a sorcerer and part of initiation is living through your death years before it occurs, what must that do to you? You carry it with you, you know when it happens, you dream of it—could you change your fate if the time came? Would you want to? Or, having resigned yourself to it so long ago, do you simply play the part? Even at the end, even defiant and angry Onyesonwu who does not fear death, even she submits to her own death.

All in all, I felt the pacing could have been tighter, and there are ticks of Okorafor’s writing I don’t particularly like, but the worldbuilding is so acute and profound and the scope and brutality of the questions she asks with her writing are so pressing that I don’t care. And for other readers? She will be stylistically perfect. Your mileage may vary, but likely this is a book well worth reading either way.