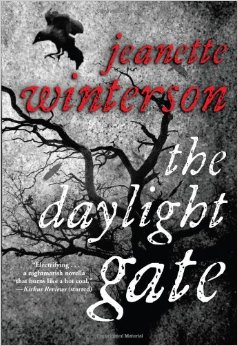 Under the paranoid reign of James I, witches and Catholics are hunted across the English countryside. Lancashire in particular is a suspected home to both populations. Jeanette Winterson’s THE DAYLIGHT GATE takes a historical instance—the first documented witch trial in English history—and spins around it a tale of what might have happened. The story unfolds from multiple perspectives: from the witches’ viewpoints, from the viewpoints of those who hunt them, from the viewpoints of those who try not to involve themselves but who cannot help but get drawn in.

THE DAYLIGHT GATE is a small, feral book. It is prose, but reads like poetry. It is set in England, but the northern England of 1612 is a land so far removed and the lives of the people there so different that it is intoxicating. It is beautiful and horrific at once, and it revels in that dichotomy.

The book is ultimately about liminalities—the title refers to the witching hour, twilight, the time where day and night dangerously blend together. The narrative shuffles around in time and space, bats back and forth between points of view, and is anchored really by a single character: Alice Nutter. Alice, herself, is a study in liminality: a woman born poor who makes her own fortune and therefore knows both wealth and suffering. A woman who loves both women and men. A woman who was married once—just once—but who has her own land and her own possessions. Alice is perceived as dangerous, as redemptive, as powerful, as impotent depending on who you ask. But she is always on the outskirts.

‘You are stubborn,’ said Roger Nowell. ‘I am not tame,’ said Alice Nutter.

The book hinges on Alice’s choices, on Alice’s will and strength. Alice’s ability to choose depends on her willingness to walk the fine line between states—between polite society and rebelliousness, between femininity and masculinity, etc. She has secrets, and she has moments of startling frankness. She has her undoings, but some of the are of her own accord and some of them are not. It is a mark of Winterson’s talent that Alice, as a character, grows in complexity in the span of such a short book. Actually, quite a few characters do—a priest/terrorist has a crisis of conscience, the afore-quoted Roger Nowell turns out to be a much more layered and decent man than he seems to be at first, and one character in particular has evolutions on evolutions I did not expect.

This is a book, at its heart, that is deeply feminist. Virtually all books written by women about witch trials are. What Winterson brings to the forefront here is the terror and the beauty of the liminal state, the power of between-ness. What is a witch but a woman with power she’s not supposed to have? What is that but something in-between: a feminine-masculine thing? It scares us because it’s slippery, hard to define, because it might just turn into a hare and escape a trap, run into the forest and out of sight. This is old ground Winterson is treading, yes, but it’s important ground to tread and she treads it well, with aplomb, with a spring in her step and a glint in her eye.