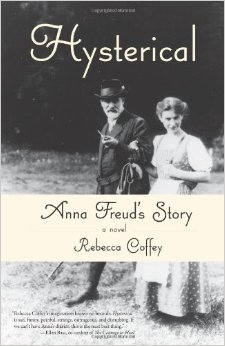 HYSTERICAL: ANNA FREUD’S STORY, by Rebecca Coffey, is an historical novel told from the perspective of Anna Freud. It is a memoir Anna writes on her deathbed, and in true Freudian fashion as Anna reflects back on her life—the choices she made, the actions which defined her, how she came to be who she was—much of her memoir centers on her childhood. And much of her childhood ruminations center on her relationship with her monstrously overshadowing father, Sigmund Freud.

In the Author’s Note of the book, Rebecca Coffey, a journalist by training, mentions that she did not set out to write a novel. When the various estates and Freudian strongholds kept Anna Freud’s personal letters and writings under lock and key, Coffey turned to fiction to fill in the blank spaces. This, I think, is an admirable approach—Anna’s is a voice that deserves to be heard. Anna was a lesbian, but her father’s work denounced her sexuality. At the same time, Anna Freud, of all of Freud’s children, was his clear intellectual heir and also his caretaker in his old age. They had a close professional and emotional relationship, but how did those theories about Anna’s “brokenness” affect her? Despite his warnings about the inherently erotic nature of the analytic relationship, Freud analyzed Anna, probably about her sexuality—what must that have done to their relationship? These are the questions Coffey sought to explore with her novel, and they are good ones. They are ripe for exploration. I was chomping at the bit to read this book.

This is a situation, ultimately, of unfulfilled promise. When Coffey allows Anna to delve into the questions above, it is only with glancing blows. The story behind the book—Coffey’s search for answers, the tired old Freudian vanguard circling the wagons and shutting her out, her turning to fiction to create answers for herself—is more intriguing than the book itself, which is a great pity.

For the book to work, Anna has to shine. As a narrator, for us as readers to carry with her, I feel the book could have gone one of two ways: she could have been blisteringly honest, terrifyingly honest about everything. There would have been anger, and evisceration, and confusion. A lot of emotion. A lot more emotion than she displays in the book as Coffey wrote it. Or, Anna could have been inherently unreliable—equivocating, hero-worshiping, lauding Sigmund in ways that betray to the reader that perhaps not all was what it seemed. Instead, we got an Anna who was removed and distant, smirking and gentle. It seemed it wasn’t her own story she was even telling.

The rhythm of the narrative was strange; so much focus on some episodes of her life and so little focus on others. This is, perhaps, an odd complaint to make here, but I would have preferred the book to be less psychoanalytically focused—I would have liked fewer exhaustive sessions of Anna detailing her weird dreams to her father and more scenes of her actively living her own life. I wanted to see and feel her actually fall in love with the women in her life and experience her grappling with what that meant—not in sessions with her father, but in her own mind and in her skin. Ultimately, given the tightness of the focus on the analysis sessions with Sigmund, and given the narrowing in on his homophobia, the book became more about Anna’s inability to save him from himself than about her thoughts or her life or her actions.

As a novel, the book suffered from a lack of characterization and flawed pacing. To succeed, Anna’s voice needed to be strong enough to carry the book, but Coffey never found it—Anna drifted into the background, and as in history, she was overshadowed once again by her larger-than-life father here. I applaud the intent of this work, but the execution left much to be desired for me.