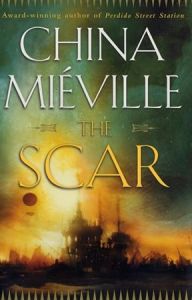 China Mieville’s world of Bas-Lag is a strange, fascinating, massive place. THE SCAR, the second of Mieville’s trio of Bas-Lag novels, starts the story in New Crobuzon, where PERDIDO STREET STATION took place, and then quickly moves out to explore far, exotic corners of the world. The worldbuilding, this organic exploration, represents the best part of THE SCAR.

THE SCAR takes place immediately after the events of PERDIDO STREET STATION. The fallout from PERDIDO STREET STATION sets the plot of THE SCAR in motion: the New Crobuzon militia is rounding up all of Isaac Dan der Grimnebulin’s known associates. Bellis Coldwine, a former lover of Isaac’s, flees the city before they can get to her. She learns an arcane language and secures a place on a ship bound for Nova Esperium, a fledgling colony of New Crobuzon. She plans to lie low in the colony for a few years until the heat dies down. She is forced to run, but Bellis is certain it’s temporary.

Bellis’ plans are ruined when the Terpsichoria is taken by pirates.* The ship is boarded, the commanding officers are shot, and the ship is comandeered. The pirates steer the Terpsichoria to Armada, a legendary city of stolen ships adrift in the Swollen Ocean. The remaining crew and passengers of the Terpsichoria are absorbed into Armada’s population, given housing and jobs, but are told in no uncertain terms that they can never leave the floating city. Some, like Bellis, are horrified. But there were others on the boat who don’t mind so much. Tanner Sack, a Remade man grotesquely punished for a crime by a magical reshaping of his body, was on the ship as a prisoner sent to Nova Esperium to serve as slave labor. While the press-ganging robs Bellis of her freedom and agency, to be treated as any other citizen, to be paid for his work, gives Tanner Sack his dignity back and wins his loyalty in the process.

Armada is the real star of the book. The story is primarily told through the eyes of Bellis Coldwine and Tanner Sack, both new to the city and press-ganged, but the heart of the narrative is a tale of political intrigue and the obligations those in power have to those they are supposed to serve. Armada reads as a real place, with a real economy. It’s a parasitic city, but it’s a living, breathing place. The factions that make up Armada spar with each other, try to undercut each other, and ultimately coexist to keep the city alive. Mieville’s descriptions of the city itself, from the way comandeered ships are repurposed to become city parks and industrial areas and living quarters, to the petty rivalries between the city’s leaders, are endlessly fascinating.

Madness and greed exist in Armada, too, personified here as the Lovers, the rulers of Bellis’ district. The Lovers, a pair of scarred people whose codependence is both deeply disturbing and awe-inspiring, have conceived of an ambitious and dangerous plan which involves a sea monster, an ill-fated scientific expedition and quantum mechanics. The Lovers’ obsession horrifies and fascinates both Bellis and the reader, and ultimately endangers the city of Armada and everyone within it.

The book is well-paced and well-plotted. The worldbuilding is wonderful. The abstract concepts Mieville toys with here are interesting. But, ultimately, the book didn’t quite work. This was one of those rare books where I was totally in love with it at the start and slowly, inexorably fell out of love with it by the end. The reason was Bellis. I loved Bellis—I loved her misanthropy, her urgency, her cold, intellectualized take on the world. I loved having her as the dominant narrator. At the start of the book, Bellis was a breath of fresh air. Finally, here was a smart, remote woman lead who found her way through the narrative on her own. Truly, this felt like her story. In Bellis’ voice, Mieville exercises a degree of stylistic control rare for him. The writing was simple and smirking and evocative.

But by the end of the book, Bellis is utterly, completely stripped of agency. It was as if, over and over, Bellis had to be taught a lesson, had to be cut down to size. That Bellis turns out to have been the pawn of a half-dozen equally arrogant and willful men over the course of the book bothered me. It undermined everything I liked about Bellis, everything that was subversive about her in the first place. And, honestly, I thought Mieville was better than that. Bellis Coldwine is, more or less, the polar opposite of Avice Benner Cho, the protagonist of EMBASSYTOWN, which I loved. He writes Avice as a woman who is brilliant and decisive and who changes the fate of an entire world. She doesn’t really see herself as the driver of those changes, though she undeniably is. Bellis, on the other hand, believes herself to be doing things, making changes, and has that ripped away from her by the end of the book. That she wasn’t seems to be a thoughtless choice. Bellis is made a fool of and for no good reason. The book is still interesting and engaging, but Mieville’s misuse of her character was enough for me to realize that I didn’t like this book as much as I wanted to or tried to.

*Honestly, Bellis is a case study in terrible luck.

1 thought on “Book Review: THE SCAR”