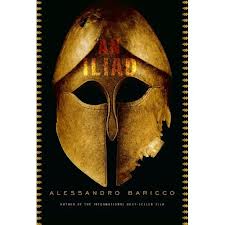 There is a thing I do not exactly intentionally: sometimes I’ll seek out new musicians by listening to covers of my favorite songs. It’s a way of being able to listen to the music and the voice without worrying about the content. I already know I like what they’re singing—the question becomes do I like how they’re singing it. Alessandro Baricco’s AN ILIAD is, I think, the first time I’ve applied this technique to the written word. That is, I knew the story Baricco was going to tell me before I knew how he was going to tell it.

AN ILIAD is exactly what the title says it is—the old, famous story told again. Or, rather, it’s a compendium of multiple Iliads: Baricco recasts the epic as a novel told from multiple points of view. Chapter by chapter the events unfold themselves through shifting eyes. Yes, we listen while Achilles speaks his piece and when Hector speaks his, but Baricco gives equal weight to traditionally smaller or altogether forgotten voices: Helen, Pandarus and Andromache for starters. Voices of the attacking Greeks and the Trojans under their seige are represented in equal measure. Through the eyes of Priam and others, we see what is happening within the walls of Troy with the same emotional weight and precision as what happens on the battlefield. It’s a fascinating way to retell a familiar story. Here, the sheer power of the story remains, but instead of a classical epic it now feels like a gritty oral history. Doing so humanizes the heroes, brings them literally down to earth.

As an oral history, this book is about death. And it’s about peace. No one in the war seems to truly want to fight it. There is a feeling amongst the soldiers on both sides that it is a pointless war, that it’s an inconvenience more than anything else. There is a resignation felt in the book over and over again as character after character lets themselves slip into death. Characters tell their story as they die. They tell their story from beyond the grave. Sometimes the distance in the oral history slips and the characters begin to address, directly, one another to great effect. This quote more or less sums up how Baricco tells the Iliad:

There is nothing on the face of the earth, nothing that breathes or walks, nothing so unhappy as man.

Baricco has an obvious reverence for the source material. He speaks at length in the introduction about the care he took with it while writing the book. This is a thin volume, much smaller than straight translations of the original epic, but Baricco worked to maintain the work mostly as a whole, removing only repetitions and scenes in which the gods themselves appear (which I think was an interesting and ultimately very effective choice). He sprinkles throughout small additions where the characters speak more about their internal thoughts and motivations, but he diligently marked in italics in the text as additions.

The problem for me was that I think Barrico erred too much on the side of caution here: his italicized original contributions are wonderfully rich and poetic. They add a great deal to the original work. And much of what he left in—long, dragging fight scenes that really just become lists of what the fallen wore as armor—could have been further condensed to better effect. The book simultaneously turned me into a definite fan of Baricco and highlighted once again my ambivalent relationship to the Iliad*. It would have been a stronger, more successful book had Baricco trusted his own voice more.

A final note on format: I read the kindle version, and I wish I’d read it in hardcopy. There are few things more frustrating to me than a truly lovely book that’s been shoddily released as an ebook. This was a traditionally published book with substantial resources behind it, and there was no reason for the awkward reading experience I had** to have happened. I recommend this book, and I especially recommend it in hardcopy.

*There is nothing, though, ambivalent about my views on Paris. What an asshat. Literally no one ever has anything nice to say about Paris besides the fact that he’s pretty.

**Specifically, there was inconsistent formatting, little use of white space which made headings and transitions awkward, and a bizarre recurrence of unnecessarily hyphenated words (words hyphenated in the middle of a line as if they had once been at a line break).