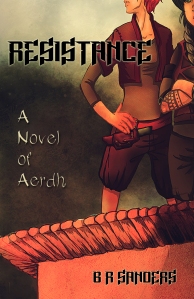 The high desert sun beat down viciously on Salla’s skin. He’d spent practically his whole life in the City of Mages and still he’d never adjusted to the fierce, bald brightness of the desert sun. He wiped the sweat from his face and hissed in pain. He’d managed to get a sunburn in the meager half hour it took to go buy fruit from the sellers down the street. He took it in stride: as head of the Vinkenti Brotherhood, leader of the City’s drug growers and assassins, it would be easy to think he ran the City. It was good that the bright sun and dry air kept him humble and made him remember he was, still and always, just one man among many.

He slipped into his house—a one-room structure little more than a shack in the City’s garden district where he and the other blue elves flocked. His house had no garden. The paint was peeling. There were holes in the roof, which would have been of some concern if it rained more than once or twice a year. He set the bag of fruit down on his table and ladled water into his single stoneware cup from a cistern in the corner. He sat on the floor and halved a pomegranate. He had just begun to eat when Shava burst through the door with young Velo in tow. Salla sighed. The Brotherhood was a family and he, as its leader, was everyone’s father. Everyone’s peacemaker. Everyone’s shoulder to cry on. The one who always had to say no. The one who gave out so many loans he had no chair of his own to sit on. And if he was their father, and they his sons, no son was wilder or more troublesome than young Velo.

“Salla!” said Shava. He thrust Velo into the middle of the room. “This stupid kid, he—”

Shava bit back his words. He gave Salla a small, deferential bow and left the house. Salla took a long look at Velo: a very young man, hardly yet a man at all. A good-looking man, a preening and vain type. He oozed the careless confidence of a young and brilliant assassin. Velo grinned when the door closed behind Shava. “You know, the other brothers speak often of your humility, Salla,” said Velo.

Salla gestured to the floor. “Sit. Have some pomegranate.”

Salla looked up. “Just the bloodstains, then?”

Velo gestured to his shirt with a flourish. “A pop of color. It’s but an accent. Truly, though, to bring me here for chastisement, it’s absurd. Surely you see that; for the leader of the Brotherhood to live like you do is something I cannot understand. I ran to escape this kind of sad little life.”

Salla regarded Velo, young, brash Velo. “Word is you murdered the head of the peacekeepers.”

Velo smirked. He flicked a bit of lint off his sleeve and onto Salla’s floor. “I assassinated him, yes.”

“By me. I asked myself to assassinate the head peacekeeper,” said Velo, “and I generously agreed to do so. So, now he’s dead. He was hassling us. I told everyone we should take him out and no one made a move against us. He put three of us in prison, and you just let him do it.” Velo shrugged with a furious nonchalance. “You should be thanking me. He won’t hassle us again.”

Salla sighed. Velo had been nothing but problems for him since the second he stepped foot in the City. “Now you’ve murdered four men instead of one,” he said quietly.

“The men of ours he put in Sanctuary will not live through the night. They were hostages. In killing the head peacekeeper you’ve killed them, too.” Velo blanched. Pretty, headstrong Velo froze. The wry smile slipped from his face. Velo made for the door, but Salla was still very quick, even after all these years. He caught Velo’s ankle. The boy fell heavily to the ground, into the packed dirt of Salla’s floor. “You’re a danger to the Brotherhood, Velo,” Salla said as he tied Velo’s wrists together. “The peacekeepers will catch you and hold you in prison. It’s best for us to keep you out of sight. It’s best for them to have someone to blame for the carnage you caused. I do hope your stay with the peacekeepers teaches you patience.”

1 thought on “RESISTANCE Ficlet #3: The Upstart”