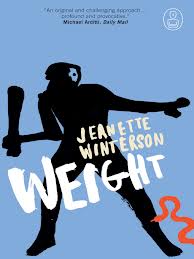 Weight by Jeanette Winterson, part of the Canongate Myths collection along with Atwood’s Penelopiad, is a deconstructed retelling of the myth of Atlas. That sentence alone fails to capture the sweep of this slim little volume, or the depth to it. The book is really about the way we use narrative to construct ourselves and our identities.

The two central characters of the book are Atlas, the titan monstrously strong enough to support the entire cosmos, and Heracles, the half-human half-divine hero who, in the course of his labors, shoulders Atlas’ burden for awhile. In Winterson’s portrayal, the two stand in sharp relief: Atlas is silent, still, thoughtful, patient. Heracles is all bluster, all action. Over the course of their interactions and their divergent lives, though, Winterson shows how each of them, at their core, is driven by the same thing: a sense of predetermination, of fate. I say a ‘sense of’ because once the book establishes this it begins to methodically deconstruct the idea of fate. The nature of self-fulfilling prophecy is explored in some depth, casting what both Atlas and Heracles perceive to be their fate, this course of their lives determined out of their grasp, as a fact of inertia and momentum from the choices they themselves have made. Much use is made of the idea of self-composed narrative as a manifestation of this: more than once Atlas “wants to tell the story again,” this time a different way, this time an attempt to push himself past the boundaries he’s built for himself. The book, then, is a meta-narrative as much as it is an actual story. Heracles falls prey to his self-made fate, but by the end of the book (set, curiously, during the space race and featuring poor Laika, the Russian cosmonaut dog sent to die in space) Atlas, sitting in the dark emptiness of space, telling and re-telling his story, manages to shrug his fate off. Thus, the double-edged sword of narrative—its capacity to constrain us and its capacity to set us free—is explored here.

There is another character in this book, and it’s Winterson herself. The thoughts of Atlas are cut with occasional interludes from Winterson herself, who draws parallels between her lived experiences—childhood abuse and the resulting need for self-sufficiency, difficulties with intimacy, difficulties escaping the gravitational pull of her own life choices—and the struggles of Atlas. The result is a deeply personal exploration of the meaning of this particular myth. As someone with strikingly similar internal struggles as Winterson, this was a captivating thing to read. I recognized in her writing about herself the marks of a similarly wounded person: the feigned emotionlessness of the retelling, the matter-of-fact tone, the minimizing of the damage done. It’s incredibly honest and incredibly personal writing, and she incorporates it into the text in a way where it supplements the story she’s telling rather than the other way around. Even with Winterson’s meditations on herself as a modern-day Atlas the book remains the story of Atlas the mythological figure.