I submitted RESISTANCE to the press last Sunday, and now I’m in the waiting-for-feedback limbo. I’m still very much in the process headspace, and I just finished re-reading all the Harry Potter books and having all the resulting Harry Potter feelings, so it was time to grab something new to read off the shelf. I grabbed this: 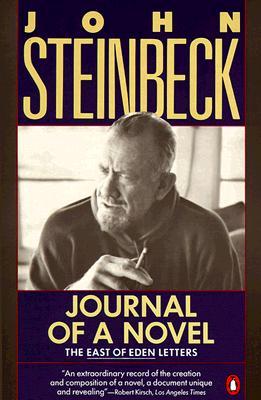 really this should be titled WATCH STEINBECK WRITE LIKE A BOSS

I didn’t really think too much about it, just shoved it in my backpack. And then I marveled at the fact that my backpack was at least 5 pounds lighter than it had been in two months since I was no longer hauling around a Harry Potter tome, but that’s neither here nor there. I grabbed it, and then I cracked it open on a bus and realized I was reading, largely in real time, a (much greater) author’s own process-y headspace while he wrote EAST OF EDEN. Apparently I am still very much in dialogue with myself about the writing process, and now I am in a one-sided dialogue with John Steinbeck, too. This volume is a collection of letters he wrote but did not send to his editor, Pascal Covici, while he wrote the first draft of EAST OF EDEN. The letter served as a warm-up exercise for him, something to get him in the groove of the day’s authorial work, and as such they flit from the gritty mundanities of smudged graphite to his ultimate sweeping purpose for his novel from paragraph to paragraph. The style is casual and unguarded, which makes sense given that he never expected anyone to read these letters, and it serves as a friendly work diary.
There are weird familiarities in terms of process as I read Steinbeck’s work diary. He talks of his book “having pups” and getting longer and longer, breeding side-stories and subplots. And, man, do I ever know that feeling. My books are all so interconnected that I sometimes feeling like I’m writing fanfiction about my own stuff. RESISTANCE, or rather its base story, “Proof”, came about because one of the leads was mentioned in “Blue Flowers” and the other lead down the line has certain interactions with some characters in THE LONG ROAD. This whole project began, essentially, as a way of filling in some backstory for other projects. Every minor character is a hero in her own story, and I have a very strong tendency to let every minor character take center stage at some point.
Steinbeck is also a much more deliberate writer than I am in terms of structure. This could be simply an individual difference, but it could also be that EAST OF EDEN was written late in Steinbeck’s career, written when he had done most of his learning and stumbling, while I’m still just crawling through. He had very particular ideas of what a chapter is or should be. He had very particular ideas about how chapters should relate to and balance each other. He came into the book very much knowing how he wanted it to be read–not necessarily what he wanted to say, but how he wanted the reader to feel, what the experience of reading it should be like. He spends much more time in his unsent letters discussing pace, discussing the need to keep himself relaxed in order to keep the text itself relaxed, than he does on plot or character development. Again, maybe this is a sign of my youth as a writer, but I haven’t yet started a project with an intent to readership experience like that. I don’t know that I can just yet.
Now, I really like RESISTANCE. I think it’s awesome. It’s no EAST of EDEN, though; that shit was a masterpiece. The biggest, strangest and most obvious revelation I’ve had reading his letters is that the work one writer is the work of all writers. Steinbeck wrote long hand with pencils–he was very, very particular about his pencils, actually and spends much time outlining his pencil preferences in these unsent letters to his editor–and I wrote RESISTANCE on a laptop. He wrote EAST OF EDEN at home at a very particular writing desk of his own design, which he fiddled with and perfected over the course of the novel, and I wrote RESISTANCE mostly on buses and airplanes. The methods are different, but his process and mine and probably everyone else’s is essentially the same: you just…write it. You just write a chunk (mostly) every day until the beast is done. Or, in Mr. Steinbeck’s own words right as he began:

I don’t suppose writing consists in anything more than doing it.